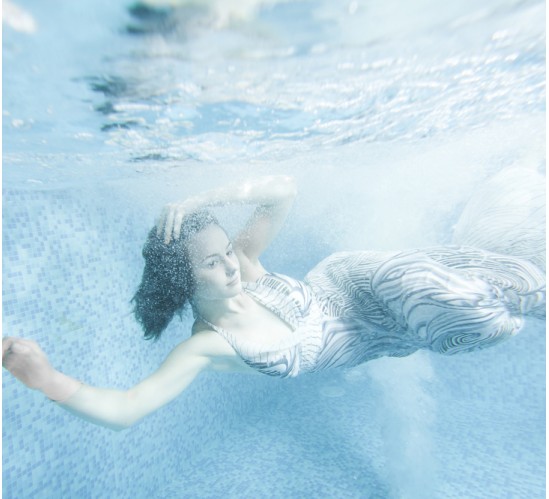 The Three Nymphs was commissioned by two Kempense orchestras the Royal Fanfare Entertainment After Labor Rijkevorsel and the Royal Fanfare Band De Eendracht Dessel. In 2016, the nearby canal Dessel-Turnhout-Schoten was celebrated. This celebration became the starting point of a new four-part through-composed work.

An idyllic sculpture of three water nymphs in the canal is located on Campineplein in Dessel. These water nymphs and the flowing water of the canal were the inspiration for the title and the first atmospheric part Nymphs of the Canal.

The second part, The "Vaartketsers", refers to the people who pulled the ships on horses. There used to be no inland vessels with motor. The ships had to be towed along the side with towbars. This was done by both men, women and children on farm horses. In the vernacular they were called the "speed skaters". "Vaart" is Kempens for "channel" and "ketsers" refers to the bouncing horseshoes on the towpath. All this is expressed in the second part.

With part three, The Dead Line, the tension is built up. A new and energetic theme breaks with the previous parts to introduce the new part. The title of this section refers to the English term for The 'Deathdrift' from the First World War. This was a barbed wire barrier that was under high voltage. Many who wanted to break this electric barrier were killed in the barbed wire. At the same time, The Dead Line also refers to his denotation and the achievement of a deadline. Everyone is confronted with deadlines. These bring with them a lot of tension. This fact forms the tension of the third part.

Finally, the fourth part is a revival of the atmospheric main theme followed by a grand and dynamic final.

* Does your orchestra have Horns in Eb or Trumpets in C? Additional parts can be requested for free by sending an e-mail to score@ypress.eu. Make sure to mention the unique catalogue number and your order number.