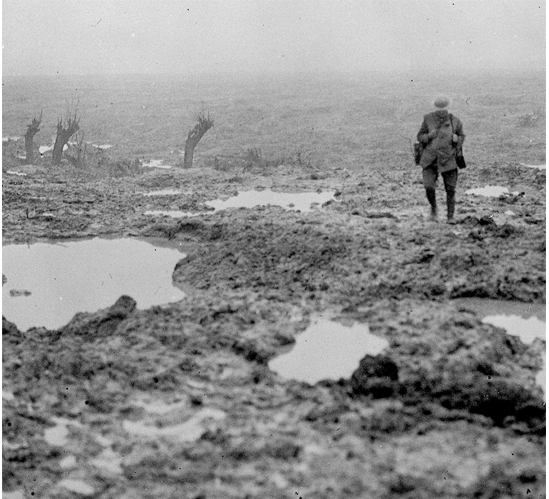 Ypres, April 22, 1915 - The German troops are launching a new, horrible form of warfare in our regions: the chemical weapons. Approx. 5000 soldiers are killed by a poison gas attack.

Pro Patria Mori is inspired by and based on the poem Dulce et Decorum Est by the British poet Wilfred Owen (1893-1918). The poem was written during the First World War and describes how a soldier dies during a poison gas attack. This poem is characterized by the harsh and almost shocking writing style. With this, Owen wanted to make the readers feel how hard and chilling the war was. The title of the poem refers to an ancient Latin expression of the Roman poet Horatius (Oden iii.2.13): Dulce et decorum est pro patria mori (= It is a virtue and an honor to die for the homeland).

Pro Patria Mori is a through-composed work. Each part is based on one or more verses of Owen's poem. The composition does not only express the verses of Dulce et Decorum Est, but also indirectly describes the atmosphere of the 'Great War' and the horror of chemical warfare in the Ypres landscape. The beginning of the composition sounds mysterious and turbulent. This describes the atmosphere of the days before the outbreak of the First World War. There is clearly a troubled and ominous undertone. Then the battle breaks loose. The German troops invade Belgium. The end of the battle is reached through a great climax. The lament of the soprano voice represents the portrait of a gigantic deserted battlefield: thousands of bodies, ruins, craters, abandoned trenches and so on.

The composition ends with a quote from the cantata Dona Nobis Pacem (= Give us peace) by the British composer Ralph Vaughan Williams. This expressive finale is a personal interpretation and orchestration of a theme from the cantata. Dona Nobis Pacem was written in response to the horror of the First World War. With this quote the composition goes out with a sign of hope and a plea for peace ...

* Does your orchestra have Horns in Eb or Trumpets in C? Additional parts can be requested for free by sending an e-mail to score@ypress.eu. Make sure to mention the unique catalogue number YDME2015003 and your order number.